Johnson Matthey plans to stop manufacturing chemicals for batteries, dealing a blow to Britain’s ambitions to develop a homegrown champion in the race to power electric cars.

The 204-year-old UK company announced its decision to exit the key business on Thursday, as it warned that supply chain disruptions would hit profits and said its chief executive would step down next year.

The group had been betting big on developing a jet-black substance called eLNO, made from nickel, cobalt and lithium and used in cathodes, the most expensive part of an electric car’s battery.

The plan to sell this part of the business will end the company’s ambitions to transform itself into a key supplier for electric cars. The sector is predominantly led by Chinese producers such as CATL, with Europe’s Umicore and BASF remaining as the large western competitors.

Johnson Matthey said the potential returns from its capital-intensive battery materials unit would be inadequate as the market became commoditised, stripping away its ability to offer a unique product.

“Our technology is still good. It’s more about how rapidly this market has been accelerating to a large-scale, more commoditised market. The premium for our product has been eroded,” said chief executive Robert MacLeod.

Analysts said an Asian cathode manufacturer or a European automaker could be interested in buying the business.

Johnson Matthey’s share price had plummeted nearly 19 per cent to £22.43 by Thursday afternoon.

The FTSE 100 company warned that annual results for the year ending in March would suffer because of supply chain problems, lower precious metal prices and US labour shortages.

MacLeod, who announced he would leave the company in 2022, said the group would focus its investments on hydrogen technologies and decarbonising the chemicals supply chain instead of battery materials.

Johnson Matthey makes more than half of its revenues from catalytic converters that absorb harmful emissions from petrol and diesel cars, a sector facing chronic decline.

MacLeod will be replaced by Liam Condon, currently the head of German group Bayer’s crop science unit, who faces a tough task in keeping the company relevant as the automotive and energy sectors transition to electric and green power.

MacLeod denied that his departure was connected to the decision to exit the cathode materials business, saying that he told the board of his desire to retire “many months ago”.

Rob Hales, an analyst at Morningstar, said: “This was the company’s biggest bet and it has proven to be a strategic failure.”

Energy is the world’s indispensable business and Energy Source is its newsletter. Every Tuesday and Thursday, direct to your inbox, Energy Source brings you essential news, forward-thinking analysis and insider intelligence. Sign up here.

London-based Johnson Matthey previously said its cathodes would help increase the range and reduce the cost of batteries and it had been building eLNO production sites in Poland and Finland at a total cost of £800m-£850m.

Earlier this year, the company attempted unsuccessfully to find a partner for its battery materials venture, which had assets worth £340m.

Charlie Bentley, an analyst at Jefferies, said its lower returns meant the company would struggle to realise much value from any sale.

The declining catalyst business and cathode materials business exit put into question the company’s “ability to be a supplier to the automotive chain over the longer term”, he added.

Here's What To Make Of Black Hills' (NYSE:BKH) Decelerating Rates Of Return

Fri Nov 12 , 2021
Finding a business that has the potential to grow substantially is not easy, but it is possible if we look at a few key financial metrics. Firstly, we’d want to identify a growing return on capital employed (ROCE) and then alongside that, an ever-increasing base of capital employed. Basically this […] 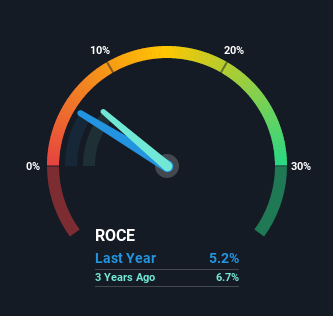